Created by writer Gardner Fox and artist Murphy Anderson, Zatanna first appeared in Hawkman #4 (November 1964). When she is introduced, she is on a quest to find her father Zatara who made his first appearance in Action Comics #1 but had not been published regularly for several years.[2] The storyline crossed multiple comics published by DC at the time, culminating in issues of Justice League of America, also written by Fox. 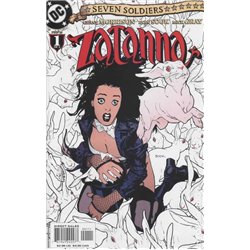