What The--?! is a Marvel Comics comic book series self-parodying the Marvel Universe, similar in vein to the 1960s series Not Brand Echh. It was billed as "The Marvel mag of mirth and mayhem!" The series ran for 26 issues from August 1988 through Winter 1993, with issue #26 being a Fall Special. It typically contained a series of short stories with comedic takes on Marvel heroes and villains, such as having Spider-Ham substitute for Spider-Man. 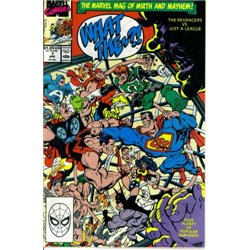