What If, sometimes rendered as What If...?, is a comic book anthology series published by Marvel Comics whose stories explore how the Marvel Universe might have unfolded if key moments in its history had not occurred as they did in mainstream continuity. Since What If debuted in 1977, the comics have been published in 13 series as well as occasional stand-alone issues. 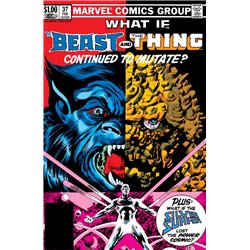