Robin is the alias of several fictional superheroes appearing in American comic books published by DC Comics. The character was originally created by Bob Kane, Bill Finger, and Jerry Robinson, to serve as a junior counterpart to the superhero Batman. The character's first incarnation, Dick Grayson, debuted in Detective Comics #38 (April 1940). 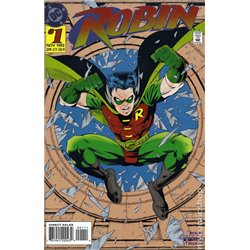