Infinite Crisis" is a 2005–2006 comic book storyline published by DC Comics, consisting of an eponymous, seven-issue comic book limited series written by Geoff Johns and illustrated by Phil Jimenez, George Pérez, Ivan Reis, and Jerry Ordway, and a number of tie-in books. The main miniseries debuted in October 2005, and each issue was released with two variant covers: one by Pérez and one by Jim Lee and Sandra Hope. 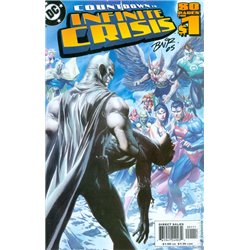