Crisis on Infinite Earths is an American comic book published by DC Comics. The series, written by Marv Wolfman and pencilled by George Pérez, was first serialized as a 12-issue limited series from April 1985 to March 1986. As the main piece of a crossover event, some plot elements were featured in tie-in issues of other publications. Since its initial publication, the series has been reprinted in various formats and editions. 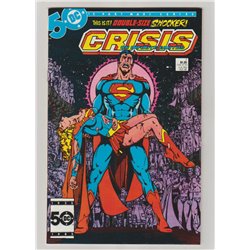